She awoke with a gasp, sitting up. God? Was that You?
A pivotal year awaits Bless, a young woman who hides her passion: her music. She's not exactly friends with T'meal, a talented athlete who won't explain why he's passed up the chance of a lifetime. Nor is Bless too close to Lamall, a boisterous playboy with a broken private life that's spiraling out of control.

But Bless knows she's meant to help these two young men. She can't deny the Voice that told her so.

This is a book with carefully crafted characters and lots of family drama. I thought it was unique that the story comes from the perspective of a shy younger sister, who is the axis everyone else revolves around (although she doesn't really see it in herself). The author's strength lies in her ability to touch hearts and create characters and dialogue that come alive. I do wish it had been edited down a bit, but I recommend this as a worthwhile Christian read dealing with serious issues.

I received an ARC of Yella's Prayers from the author. 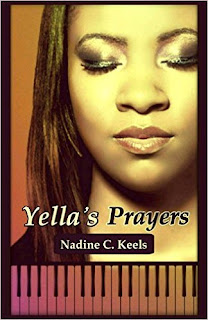